Make a NextJet reservation and find deals at Alternative Airlines

NextJet was a provincial airline in Sweden with its main operating base at Stockholm Arlanda airport.

NextJet was a small independent airline operating to seven airports in Scandinavia: Stockholm, Hagfors, Sveg, Torsby, Orebro and Mora in Sweden along with Copenhagen in Denmark.

Flights are operated by a 19-seater Beech 1900D aeroplane. NextJet also operated an air-taxi and charter flight using a Cessna 560XL which justifies the "Jet" part of NextJet.

NextJet serve most of their domestic destinations from Stockholm-Arlanda Airport.

As of summer 2010 they also serve a lot of domestic destinations from Stockholm-Bromma Airport on behalf of Sverigeflyg.

As of summer 2010 they also serve Stockholm-Arlanda Airport and Helsinki-Vantaa Airport from Mariehamn Airport on the behalf of Air Åland. Many of the domestic routes operated by NextJet are subsidised by the Swedish government.

One of the airline's investors is former member of ABBA, Björn Ulvaeus. It also operates taxi and executive charter flights with two business jet aircraft. NextJet has 14 aircrafts and 330 employees and serve 18 destinations in Scandinavia.

NextJet has a codeshare agreement with SAS, interline agreements with KLM, Finnair, Airfrance, Qatar and Wideroe. In June 2016, NextJet ceased the route between Halmstad and Arlanda.

NextJet has 14 aircraft that operates within their route network as well as on behalf of other operators.

All NextJet's tickets allow one piece of checked in baggage, maximum 23 kilos, and 1 carry on luggage.

Business Class tickets allow another piece of checked in baggage.

Stockholm Arlanda Airport, is the largest and  international airport in Sweden and it is a popular getaway for people who want to travel on small and large parts of Sweden. 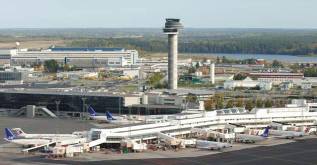