Make a Tar Aerolineas Booking and Find Some Amazing Deals

TAR Aerolíneas (also known as Tar Aerolineas) is a Mexican regional airline based in Querétaro, Mexico and operates scheduled services to 24 domestic destinations throughout Mexico. The airline was founded in 2011 and first began operating in 2014 between Querétaro and Guadalajara.

Initially, TAR Aerolineas began operating the central region of the country, offering services on routes not served or insufficiently served by other airlines and it's mission is to become the flagship company of regional aviation in our country, with presence and network of particular connectivity in each of the regions. Recently the airline has begun the expansion of routes to the southeast of the Mexican Republic.

Currently, TAR Aerolineas offers one class fare on its flights: the standard economy. Onboard, you can enjoy some light refreshments.

Enjoy comfortable and spacious seating with a good amount of legroom. The team will be on-hand to help.

Passengers flying on TAR Aerolíneas are permitted to bring one piece of carry-on baggage with them on the flight, free of charge. This baggage must not weight more than 10kg and must fit within the dimensions of 22 x 39 x 30cm.

Passengers flying on TAR Aerolíneas are permitted to check one piece of baggage, free of charge. This baggage must not weigh more than 25kg and must fit within the overall dimensions of 158cm.

You can check-in by visiting the TAR Aeroliíneas check-in page and selecting Tu vuelo/Check-in. Just enter your flight details and click 'Web Check-In'.

TAR Aerolineas airport check-in is available on the day of your flight. You can check-in by visiting the TAR Aeorlíneas check-in desks at the airport. We recommend that you get to the airport at least two hours before your scheduled flight departure time to allow time to check-in, drop any checked baggage and go through security.

TAR Aerolineas has a frequent flyer program called Star Wallet. Star Club benefits are also offered, where the Lounge rooms are the perfect place while waiting for your flight boarding, enjoy a good read, drinks and food, in a comfortable and comfortable place. TAR Aerolineas also offers TAR Assistance in which travel safely. The validity of the assistance is 12 hours before, up to 12 hours after the flight, on simple trips. Round trips cover the stay at the destination, with a maximum of 30 continuous days, and up to 12 hours after the return flight.

With Alternative Airlines, you can buy Tar Aerolineas flights in English! We take the confusion out of your booking with a safe and secure booking process, entirely in English! Browse from 100s of different domestic flights around Mexico and pay in the currency of your choice. You can also contact our excellent English-speaking customer service team with any concerns about your Tar Aerolineas reservation.

The airline operates a fleet of 10 Embraer ERJ 145s. 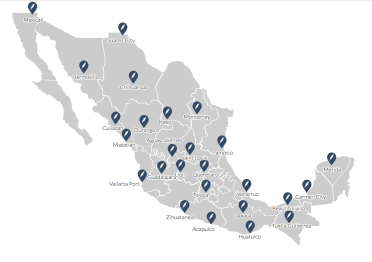 Alternative flights to Tar Aerolineas are Volaris, VivaAerobus, Interjet, AeroMexico and many more that can be booked with Alternative Airlines.