Thai AirAsia X (TAAX) is a low-cost Thai airline that offers medium-haul and long-haul flights. The airline is based at Don Mueang International Airport, Bangkok and offers flights to international destinations in China, Japan, South Korea and Australia.

The airline was launched in 2014 as a joint venture between Air Asia X and Thai AirAsia, operating its first flight to Seoul-Incheon International Airport in June of that year. Initially, the airline offered flights as far as the Middle East, with services to Tehran and Muscat. However, in 2016, Thai AirAsia X decided to cancel these flights and focus on flights in eastern Asia and Oceania.

Thai AirAsia X has a fleet that is entirely made up of Airbus aircraft. The airline has over 10 aircraft from within Airbus A330 family. The airline was the first Asian airline to use A330neo aircraft.

Thai AirAsia X flies to over 10 destinations across east Asia and Australia.

The maximum weight of both pieces of baggage combined is 7kg.

Passengers are not given a free checked baggage allowance with the Economy Class low fare. However, they can purchase either 20kg, 25kg, 30kg or 40kg of baggage along with their ticket.

Passengers who purchase the Value Pack or Premium Flex Fare will be given 20kg of complimentary baggage.

Passengers who buy a Premium Flatbed are given 40kg of complimentary baggage.

The Economy Class cabin is simple but offers a good service, with cabin attendants on hand to help. Passengers can order extras, such as food and baggage. In-flight entertainment is available to pre-order on select flights.

The Business Class cabin is comfortable and spacious, giving passengers a range of extra perks, including bigger seats, in-flight entertainment, pillows and blankets, a larger baggage allowance and meals included within the price of the ticket.

Business Class seats are large and transform into a lie/angle-flat position. Seats have a pitch of 60" and a width 20". Business seats are set out in a 2 x 2 z 2 configuration, ensuring either a window or aisle seat.

On Economy Class, in-flight entertainment is available on select flights and has to be pre-ordered at an additional cost.

There's a varied selection of hot meals, snacks and drinks onboard all Thai AirAsia X flights. Food can be pre-ordered or bought once in-flight if flying Economy Class and is included within the price of your ticket if flying Business Class.

For any special meal requests, either contact us or the airline directly. Special meals are subject to availability.

Don Mueang International Airport is an international airport located in Bangkok, Thailand. It's thought to be one of the world’s oldest operating airport and is currently one of two airports in the Bangkok area (the other one is Suvarnabhumi Airport). The airport has two runways, and handles over 40 million passengers annually, from over 270 thousand aircraft movements. 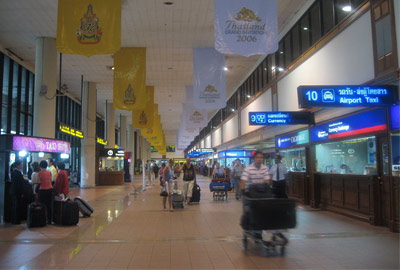 The freedom flyer programme is the frequent flyer program for AirAsia and all of its subsidiaries, including Thai AirAsia X. Passengers can earn BIG points (loyalty points) whenever booking a flight within the AirAsia Group and spend those points on any future flight within the AirAsia group. For example, any BIG points earned on a Philippine AirAsia flight can be used on a future flight on Thai AirAsia X.

There are membership levels within the freedom flyer programme, each with varying levels of benefits.

Thai AirAsia X isn't part of an airline alliance. However, it's part of the AirAsia Group. Each airline within the AirAsia group cooperates and has a strategic route network that benefits all airlines within the group.

Please click on the logos below to find out more about airlines that fly similar routes to Thai AirAsia X: